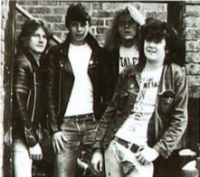 Not to be confused with the Nottingham band who released the "Jealousy" single, though both bands appear to have started around the same time, this Deuce was originally a four-piece consisting of Paul Belton (vocals and guitars), Guy Marriot (guitars), Terry Seymour (bass) and Adrian Fowler (drums).  Some of them seem to have had a connection with Spectrum Records, as they appeared on the 3 of the label's 4 Southern Comfort compilations (volume 2 was a "dance compilation").  After several lineup changes, they released a single in 1986 featuring yet another cover of Golden Earring's "Radar Love".  The exclusive track "Power Of The Realm" appeared on Metalother's Metal Warrior compilation EP the following year.  Though it was quite an improvement over their dreadful single it was too little too late and the band broke up by the end of 1987.  At that point Belton and Fowler, the only remaining members of the original Deuce lineup, formed the band St. Hellier.  St. Hellier released one album and an EP on the newly formed GI label (previously Metalother).