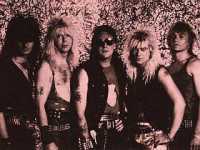 BATTLEZONE was the title of ex-IRON MAIDEN vocalist PAUL DIANNO's first band to come to the attention of the public following the break up of DIANNO and found Paul very definitely back into Metal territory. Dianno had previously formed STRIKE whilst in America with drummer Bob Falck and guitarist John Hurley, but the project eventually wound up as BATTLEZONE upon the vocalist's return to London.
The band's initial line-up comprised Dianno, guitarists Hurley and Darren Aldridge, bassist Laurence Kessler from Swiss act EMPIRE and former MAYFAIR, WOLF, CONQUEST and AUNT MAY Adam Parsons on drums. The latter had gone under the stage name A.D. Dynamite whilst in AUNT MAY. However, Parsons left shortly after to form the London based Glam troupe BELLADONNA and Falck reappeared on the scene in time to record the band's first album, 1986's 'Fighting Back' for the Raw Power label. 1986 also saw the enrollment of former DEEP MACHINE, LONEWOLF and TOKYO BLADE guitarist John Wiggins.
BATTLEZONE performed a club tour of America in 1987 to promote the debut 'Fighting Back', but musical differences within the group led to the departure of John Hurley and Bob Falck. Their places were taken by PERSIAN RISK members Graham Bath and Steve Hopgood respectively following the tour's completion. Hopgood had during the early 80's been a member of SHY and CHINATOWN.
Following the break up of BATTLEZONE, Dianno and Hopgood formed Power Metal band KILLERS releasing four albums. Hurley would later join LO GIRLS. 1990 also found Dianno fronting PRAYING MANTIS for a tour of Japan and the subsequent 'Live At Last' album. Wiggins joined a reformed TOKYO BLADE in 1995. Dianno also kept his hand during and after KILLERS by issuing a succession of solo albums.
By 1998 Dianno had resurrected the name BATTLEZONE. Joining him were Wiggins and fellow ex-TOKYO BLADE members bassist Colin Riggs and drummer Marc Angel. The latter had also been a member of BERLIN and CHINATOWN. Second guitars were supplied by Paulo Turin. This line-up cut the 'Feel My Pain' album. BATTLEZONE undertook a sell out Brazilian tour in January of 1998 with erstwhile KILLERS colleagues bassist Gavin Cooper and guitarist Nick Burr joined him on this South American jaunt.
The band toured Brazil in the same year playing a three week tour to sold out audiences up to 6'000 fans a night. Being brought back down to earth BATTLEZONE upon their return home put in a gig at the Walthamstow Royal Standard. Dianno has since gone solo again recording with Brazilian musicians for a new DIANNO album 'Nomad'. Ex-BATTLEZONE bassist Gavin Cooper joined LIONSHEART in December 2004, then moved onto STATETROOPER in May of 2005. The bassist subsequently joined the ranks of MAGNUM singer BOB CATLEY's solo band for UK dates in April 2006.