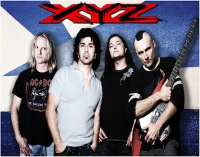 XYZ is a hard rock band, formed in the late 1980s. XYZ started off as the unofficial house band of "The Whiskey", a nightclub in Los Angeles. The original members were, Terry Ilous (vocals), Bobby Pieper (guitars), Patt Fontaine (bass) and Joey Pafumi (drums). A tour of the US withEnuff Z'Nuff and Alice Cooper followed the success of their 1989 Enigma released debut album, and they were signed by major label Capitolfor their second. [2]