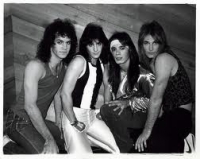 White Sister were part of the Sunset Strip in the early 80's and got signed to major label. Their 1984 EMI debut album was produced by ANGEL keyboard player Gregg Guiffria, which features an ANGEL song that was written by Punky Meadows called "Whips." White Sister received no promotion from EMI and soon dropped after debut was released. Keyboard player and vocalist Gary Brandon left the band. Whiste Sister were also featured on several Movie Soundtracks: "Save me Tonight" (Fright Night), "Dancing on Midnight" (Halloween 5), and "April, your no fool" (Killer Party). White Sister released a 2nd album independently in the U.K., but called it a day after that. In 1991, the band reformed under a different name Tattoo Rodeo. That band released two albums and broke up. In 2006, drummer Richard Wright passed away. The three surviving members of White Sister reformed in 2008 to play the Firefest Festival in Nottingham England. Currently, the band is recording a 3rd studio album. The Band: Dennis Churchill Dries (Lead Vocals & Bass) Gary Brandon (Keyboards & Lead Vocals) Rick Chadock (Guitars) Richard Wright (Drums) RCC