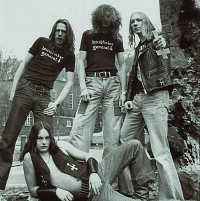 Of the 3 major NWOBHM labels, Neat Records had Venom and Ebony Records had Grim Reaper, but Heavy Metal Records' most lasting legacy was without a doubt Witchfinder General. At the time Witchfinder General were largely ignored, only posthumously getting recognition as one of doom metal's most influential bands. Black Sabbath were clearly a huge inspiration for them, as were horror movies (their name comes from the title of a 1968 film starring Vincent Price). While they are often classified as doom metal due to the Sabbath influence, as well as their dark lyrics and image, their music is mostly too upbeat for that genre (a few tracks, such as "Rabies", can be considered genuine doom metal). Witchfinder General called it quits after their second LP, Friends Of Hell, but reunited in 2006 with a new singer (Gary Martin) replacing Zeeb Parkes. This reunion culminated in a new album, the aptly titled Resurrection, in 2008.