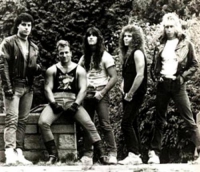 Hellion
Up From The Depths
Live And Well In Hell
Time Left: 00:30