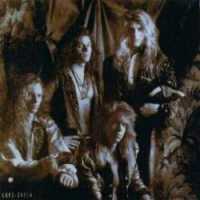 I, Napoleon was the brainchild of vocalist Steve Napoleon. Musically the band was a fun, yet at times dark, melodic hard rock band that released one album before disappearing off the face of the Earth. Canadian born vocalist/keyboardist Steve Napoleon (and onetime drummer for Witchkiller, where he went by the name of Steve Batky) had secured a record deal without actually having a band. The classically trained singer would relocate to Los Angeles, and when early work with Tommy "T-Bone" Caradonna (of Lita Ford and Alice Cooper fame) failed he recruited bassist Joe Fazio thanks to a recommendation from Bang Tango's Joe LeSte. The band would be round out by Doug Stratton (guitar, ex-Noize Toys) and Dave Imondi (drums). The debut was a classy release, sounding like a cross between Bon Jovi and Cheap trick. The album also included an excellent remake of Luba's ballad "Everytime I See Your Picture". However the LP failed miserably and the group was never heard from again, although it is rumored that Napoleon had recorded some demos for what would have become the sophomore release.