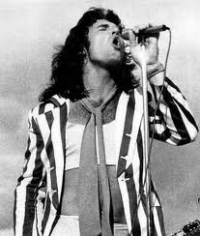 Most people think that Bon Scott is the original lead singer for AC/DC. They would be wrong. Dave Evans is the original lead singer of AC/DC. Evans never recorded an album with the band, but did record the first AC/DC single in 1974 called "Can I sit next to you girl/ "Rocking In The Parlour") which was released in Australia and New Zealand. A promotional video for "Can I Sit Next To You, Girl" was also produced.  Dave was in AC/DC from 1973 to 1974.  In 1975, Evans fronted the Australian band RABBIT for 2 albums "Rabbit" & "Too much Rock and Roll".  After Rabbit fell apart, he formed another called Dave Evans & Thunder Down Under.  That band had a short run in the 80's and broke up.  Evan became an actor after that.  In 2000, Evans started a solo career that continues on today.