Bad4Good was a band formed in 1991 by Steve Vai.  The band was a quartet of kids, the oldest of whom was 16. The group was featured Thomas McRocklin (guitars), Zack Young (bass), Danny Cooksey (vocals), and Brooks Wackerman (drums).  McRocklin had previously appeared in one of Vai's videos ("The Audience Is Listening"), Cooksey had a career as an actor (Terminator 2), and Wackerman is the youngest brother of longtime Frank Zappa drummer Chad Wackerman.  Even with Steve Vai writing the music and the record company financing several videos the band went nowhere.  McRocklin quit the band and moved back home to England.  The band got a new guitar player and changed their name to Lucy's Milk, but never got signed and broke up. Brooks Wackerman went on to play with the Infectious Grooves, Suicidal Tendencies, and is currently a member of Bad Religion.  Danny Cooksey makes his living doing voiceover work in Hollywood. RCC 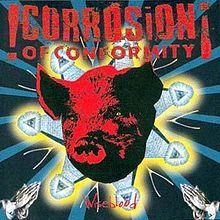 Corrosion Of Conformity
Drowning In A Daydream
Wiseblood
Time Left: 01:26