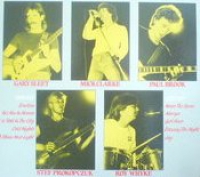 Ace Lane was formed in 1981 by Mick Clarke and Stef Prokopczuk (R.I.P. 2008) when they left another NWOBHM band, Gaskin.  They were more melodic than your typical NWOBHM act, almost AOR sounding at times.  In 1983 they released their sole LP See You In Heaven, on Expulsion Records.  The album was licensed to Mausoleum (with a different cover) and Roadrunner Records for worldwide distribution.  Two of the album's tracks also appeared on Mausoleum's Metal Prisoners compilation LP.  As the band received no money from their label, and had no financial support for a tour or second album, Ace Lane split up before the end of 1984.