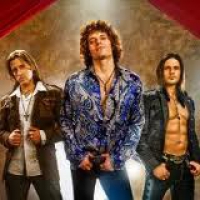 ZO2 are a power trio based out of Brooklyn, New York featuring the Zablibowski brothers "Paulie Z" on guitars & "David Z" on bass & vocals.  The trio is rounded by Joey Cassata on drums.  Paulie Z first got noticed by singing song parodies for the Howard Stern Show.  David Z  has been involved in the east coast version of the Trans Siberian Orchestra and Joey was a touring drummer with the Blue Man Group.  ZO2's day job was working has a children's band called the Z Brothers.  This would become the basis for a television show called "Z Rock" which lasted 2 seasons on the IFC network and now can found on DVD.  It was a comedy inprov show along the lines of "Curb your Enthusiasm" that featured guest appearence from rockers such as Dee Snider, John Popper, and Dave Navaro. ZO2 continues to mostly plays up and down the east coast tour, but they did tour the U.S. opening for Kiss and Poison on the "Rock The Nation" tour.  As of 2011, the band has released 3 full length albums. RCC

The Poodles
As Time Is Passing
Performocracy
Time Left: 04:48