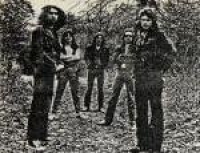 Formed in 1980, Killer sounded very much like a rough version of early Iron Maiden or perhaps Cloven Hoof. During their 3 years of existence as Killer they played a few shows locally and recorded a pair of demo tapes. Then in 1983 they changed their name to Genghis Khan, due to their already being a Belgian Killer and a Swiss Killer. Later that same year they would change their name again to Tokyo Blade. The original lineup of Alan Marsh (vocals), Andy Boulton (guitar), Andy Robbins (bass), Ray Dismore (guitar) and Steve Pierce (drums) remained the same through the first two Tokyo Blade singles.